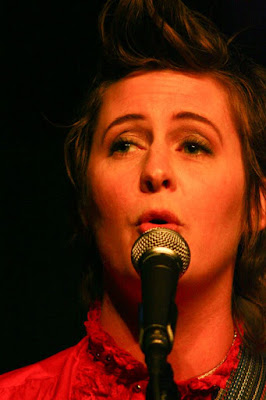 
Courtney McLean is practically the poster girl for a new breed of crooners on the Twin Cities' scene: the comedic musician. As if that title weren't brag-worthy enough, she's also a pioneer of naughtybilly music. Her band, Courtney McLean & The Dirty Curls, was the first of its kind locally, and the most sexually explicit in the U.S.  I sat down with McLean at Common Roots Cafe in Minneapolis for the low-down on how she came to be such a genre-busting gal.

Originally an actress from California, McLean moved to New York to hone her stand-up skills, then ventured to the Twin Cities to perform at the Fringe Festival in 2006.  As someone who dreaded auditions, the Big-Fish-Small-Pond atmosphere appealed to McLean.

“I loved writing my own stuff and performing it onstage, but New York was overwhelming. I needed to remove myself. I came here and I felt like the bee in the Blind Melon video. I’d discovered my people! Artists were self-produced and toured on their own. It was hard work, of course, but so rewarding.”

Not long after making the move to Minnesota in 2007, McLean began fronting the misbehaving bluegrass band Courtney McClean & The Dirty Curls.  Though the first line-up fizzled out, McLean recently decided to try again.  A casting call yielded a revamped band including Anna Weggel, Anna Popinchalk, Samantha Harris, and Rachel Wandrei. The Dirty Curls' refurbished image is  “demure juxtaposed with the ugly and forbidden.”

McLean is taking her time to write new songs while the Dirty Curls learn the old tunes. Recalling one rehearsal, she says, “It sounded so good, I started crying." 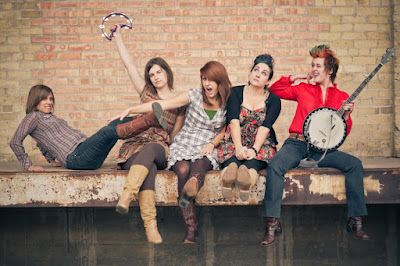 I ask McLean why, given that she has such a talented group of musicians, she decided to continue on with the sexually explicit material, knowing that it would limit the group's exposure.

“Isn’t it as limiting as any other genre?” she asks. “I mean, unless you’re making Top 40 cookie cutter bullshit, I don’t think you can expect to get on the radio. I don’t need to be famous. I’m not saying it wouldn’t be a wonderful by-product, but I don’t need that. This is just one of the many things I like to do.”

McLean's first love remains comedy, a passion she shares on stages throughout the Twin Cities regularly. She can't imagine approaching her music any other way.

“If it’s not sexy and funny, I wouldn’t want to do it. I’d just be another whiny chick with a guitar. I want to do what resonates with me and brings laughter to the world. We make people laugh about something that people don’t normally laugh about. Sex in our culture is confusing. We make fun of the foibles. There’s not a lot of shame in my songs. There’s pride and truth-telling. When I sing that I’m too lazy to be on top in 'I'm No Cowgirl', it hits a chord with people. If we can break through that ceiling, people appreciate it.”

McLean cites a woman “my mother’s age” who approached her after a show to say, “It’s so important that you are doing this.”

“Have you always been this sexually open?” I ask.

She has. McLean credits Monty Python for piquing her carnal appetite. “My dad always watched it and there are topless women on that show—in a crazy, artful way.”

Even from the tender age of 5, McLean remembers drawing naked women. As a pre-teen, “I used to dance in my room to Prince’s Batman soundtrack. I remember wearing spandex and fishnets and rubbing up against my bedpost. My Barbies were always doing it. I drew nipples on them. I identify as a heterosexual, but I have a fascination with the female body.”

Despite the seemingly precocious personality, McLean didn’t have her first French kiss until age 15 and didn’t lose her virginity until age 19.

“My friend and I made a deal in high school that as soon as one of us lost our virginity, we would call each other,” McLean tells me. “I left her a message at 3 AM one April morning saying, ‘I think you know why I’m calling you…’ ” 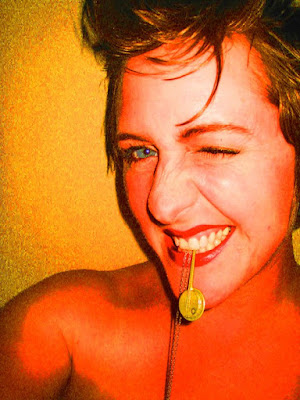 McLean admits there was a period of time when, while online dating, she removed the “dirty bluegrass band” mention from her OK Cupid profile because suitors figured out who she was before meeting in person.

“I didn’t want them to know that about me upfront,” she says. “I have no problem singing about sex in front of a room full of people—or even the fucking Grammys, were we to ever play them—but it is very hard for me to sit down with a boyfriend and say, 'I like it when you do this and this.' ”

When I ask if she’s had stalkers, McLean replies, “None that were permanent. I have suspicions where someone might have a boner for us, but nothing where I feel threatened by it. That might be because I give off a hetero-queer vibe. I don't consider myself 'girly.' The back-ups are super feminine. I'm butchy. I wear pants and the big belt buckle. It's not a weak persona. That's not to say strong women don't have stalkers; I mean, Jody Foster!”

McLean laughs and reconsiders her previous statement. “I guess I don't know what stalkers are attracted to. The past three minutes of this answer was bullshit.”

But surely McLean must have her share of haters, yes?

“No. The reviews have been positive. We’re not out there in the way that burlesque dancers or…you are,” she says, referring to this writer’s former blog persona. “Courtney McClean is a character. That person is a part of me, but she’s more outspoken than I am.”

In fact, the only controversy associated with the Dirty Curls was in 2010, when McLean called out a comic on a rape joke.

“I’m difficult to offend, but the comic put himself in the place of the rapist. I was super mad.”

McLean made a comment on Facebook to the tune of, “Rape jokes aren’t funny. Find another way to be edgy,” not realizing it would incite a lengthy Facebook “flame war,” in which neither side seemed willing to back down.

“I get that comedy is subjective, but you don’t know who is in your audience,” McLean says.  “You don’t know the secret things, the small things, that can trigger trauma.”

When critics cried hypocrisy over a naughty-billy band getting their panties in a bunch about a rape joke, McLean responded “All the sex in our songs is consensual.”

Ultimately, McLean and the comic in question agreed to disagree. Whether or not the comic will continue to tell the joke is unclear.

“Cringe humor is big. People love that shit,” McLean says. But in a society in which 25% of women have reported being raped, “It was important for me to say something. We [the first incarnation of The Dirty Curls] fucked ourselves, but it caused conversation.”

Later, McLean experienced what she calls a form of “Stockholm syndrome” and wondered if it was the rape joke that irked her or the fact that the rape joke was bad. “It’s good for us to laugh at what causes us pain,” she concludes. “Maybe I just want rape jokes to be funny.”

As far as politics and the new brood of Dirty Curls is concerned, it wasn’t McLean’s intent to combine them. Then she got riled up about Virginia’s vaginal probe debate and a friend suggested she write a song.

“I said I would, as soon as I found the comedy in it. My friend said, 'Write an angry comedy song.' ”

So that’s what she did.  “Yes, Virginia, There is an Abortion Clause”  joins other cheeky titles in the Dirty Curls' new repertoire, which includes ditties like  “When Baby Becomes Legal”, a song about wanting to get it on with someone's son after he turns 18.

Whether or not McLean will make politics a regular feature on her multiple social media feeds is still TBD. McLean likes the idea of posting a topical issue weekly on her blog; if music can be incorporated into that, so be it.

Public and political bru-ha-ha aside, McLean’s harshest critic may very well be her own mother.

“She once said, 'What would your future husband or children think?' I was like, 'Huh?' ”

McLean told her mother, “They’re silly songs about sex. Settle down.”  Then she unfriended her on Facebook.

It sounds like a reasonable reaction…but what about the people McLean can’t unfriend? Doesn't she worry about repercussions from her so-called soiled reputation?

“If I ever wanted to get a corporate job, yeah, I’d be screwed, but I don’t want a corporate job. It might be self-sabotage on purpose. I was always the older, over-achiever, good kid. Maybe this is my rebellion.” 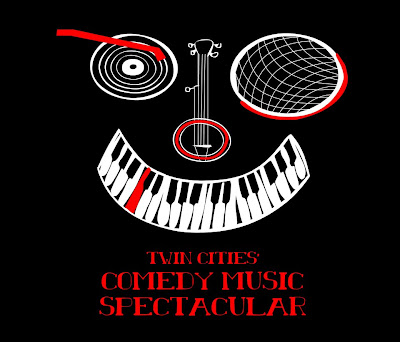 And that rebellion shall continue. Next up on the Dirty Curls’ schedule is The Twin Cities' Comedy Music Spectacular at Bryant Lake Bowl on April 7. Nicole Kerry, Andrea Leap, Jonah the Destroyer, and Valley Meadows will all perform.  “I've told them they can be as dirty as they want. I'll put a warning on it.”

The Dirty Curls will also appear at this year's Fringe festival and are in talks with Goonie's in Rochester for a two-show, one-night engagement in August.

“There's more comedy music than we think there is,” McLean says in closing.  “I think it's more accessible than stand-up comedy.  It's easier to make people laugh with a song.”


Tune into "Live From Studio 5!" on Wednesdays from 10 PM to Midnight on KFAI radio for more underappreciated local acts!

Promote Your Page Too